Every year military journalists have the chance to enter contests to be recognized for their work of the past year. Writers, photographers, videographers and graphic artists submit their work to the annual media contest awards in hopes to bring credit upon themselves and their respective units.

This year I’m proud to say that I won Military Photographer of the Year for the Air National Guard representing the 139th Airlift Wing. One might think there isn’t much a photographer from a small base in the middle of a Missouri cornfield can offer to a nation-wide contest, but the “Show-Me State” seems to hold up to its name over the bias underestimating complacency of it. Only two photos in this collection weren't taken in St. Joseph.

I’m going to briefly review each of the photos and do a bit of a ‘through-the-eyes-of-the-photographer’, to describe compositionally what was going through my mind.

In the media contest there were a number of categories to submit to: news, feature, pictorial, operational documentation, training documentation, portrait and photo story. There is a separate award submission for the photographer of the year, which includes 20 photos max, from several of the categories mentioned. It’s a summary of a photographer’s ability. 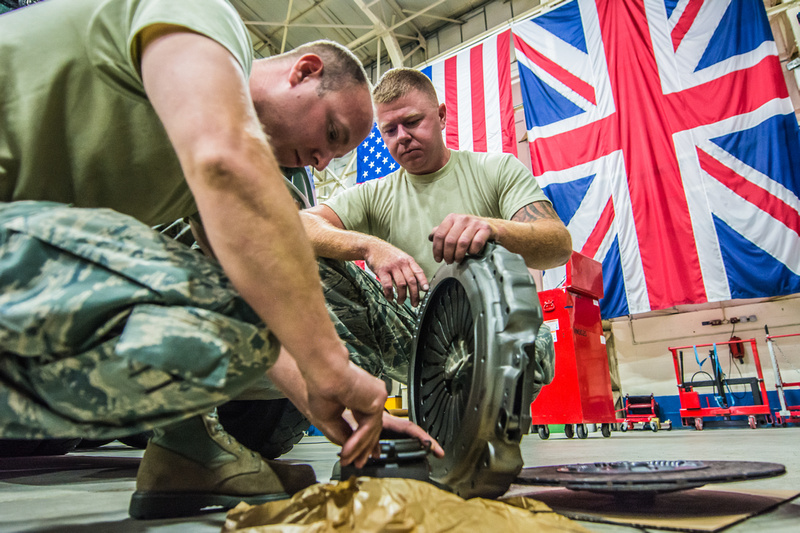 Out of the 17 photos that won me the photographer of the year, this was one of two that wasn’t taken in St. Joseph. What immediately caught my eye as I walked into the maintenance bay were the two massive flags hanging. The story I was in England to capture was the joint partnership of both nations. On trips like this, that’s always the story. If I could show that these Airmen were in a maintenance bay at RAF Mildenhall vs. some random bay in the U.S. that would be even better. I would cover all of that in the caption of course, but having two massive flags hanging from the ceiling, filling the frame, just makes the story unfold visually instead of me writing it. I would have surely taken a knee to shoot the photo anyway, but to get the flags as the background for my subject it was a necessity. 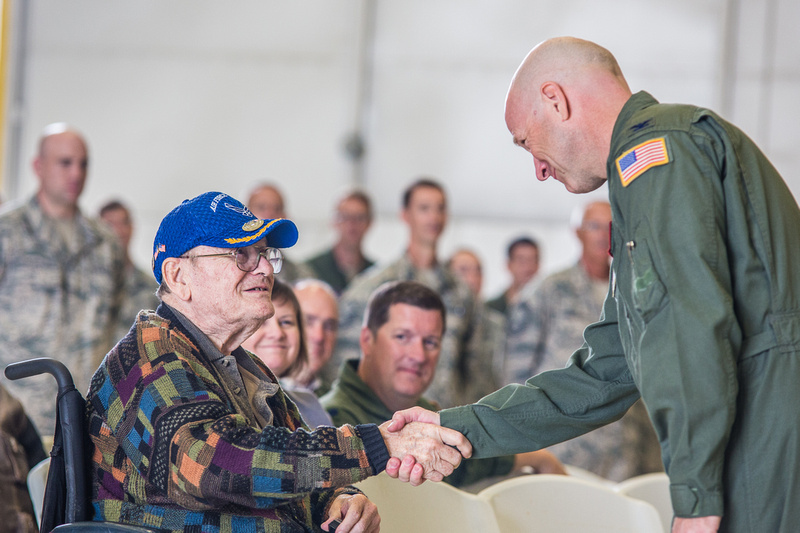 I’m leaving a lot of the photo context out, because it’s in the caption when hovering over the photos.

The story I needed to capture here was service members of new honoring those of old. Although I was farther away than I would have liked, I think I captured the emotion on the face of our veteran. That’s what I needed. The whole scene is framed by the out of focus Airmen in formation. 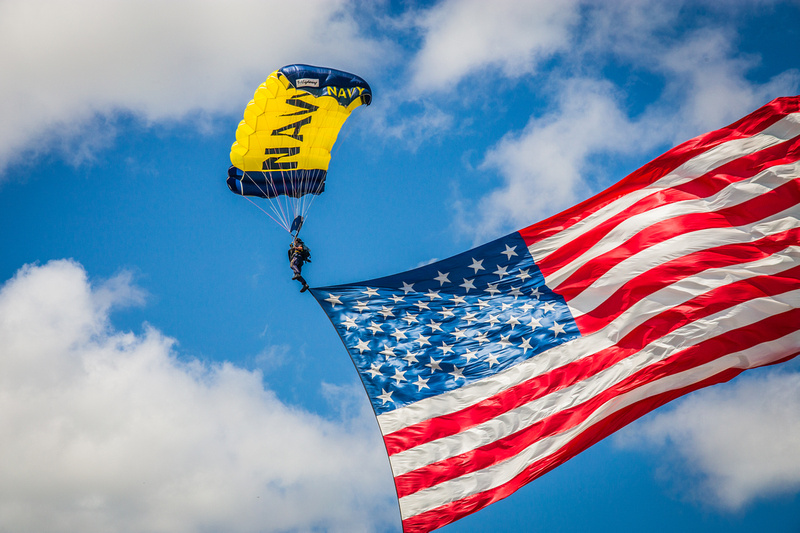 This photo was taken at an air show, as can be guessed. This is one of those photos that anyone with a camera had some sort of version of while attending the Speed of Sound Air Show. It’s a gigantic American flag falling from the sky underneath a man with a parachute! ‘Awesome! America is the best! How cool is that, not to take a picture of?’ That is what everyone and their mother was saying out on the flight line.

My thought is how I could execute that photo as best I could. I don’t want a dot in the big blue sky. I want the flag, the Navy parachute, and the Leap Frog. So I had to wait for the flag to be facing me, spread out, and low enough to see that their was a human profile under the canopy with “Navy” spelled out. Plus cropping out the dead space in Adobe Lightroom helps out too. 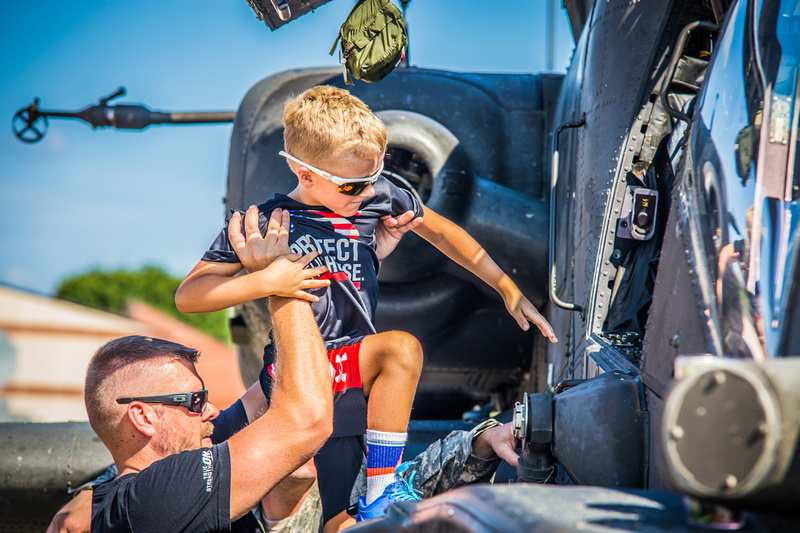 Sound of Speed Air Show performs for community above MissouriA child is lifted up onto a AH-64 Apache helicopter during the Sound of Speed Air Show at Rosecrans Memorial Airport, August 27, 2016. The air show was hosted by the 139th Airlift Wing, Missouri Air National Guard to the thank the community for their support. (U.S. Air Force photo by Senior Airman Patrick P. Evenson)

What kid doesn’t like climbing on and in a for-real attack helicopter? I’m not even a kid and I would dig it. This photo is about the moment. It’s about the moment shared between a father and son as the boy is lifted into the helicopter. Probably not the best composed photo, but the moment is captured. … Maybe there is something poetic about the underlying message of the photo regarding how this nation sends their children off to war. Haha. 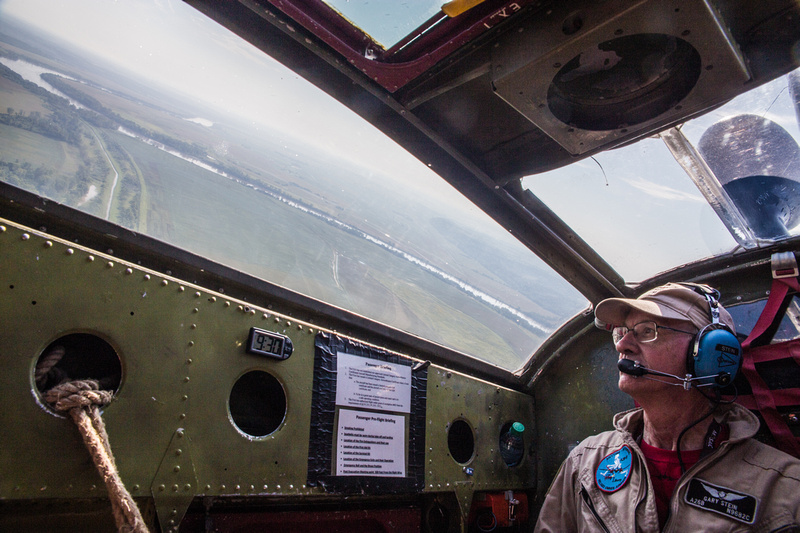 Sound of Speed Air Show performs for community above MissouriGary Stein, an aircrew member of the A-26B Invader &quot;Lady Liberty&quot;, looks out the window during a flight above St. Joseph, Mo., August 28, 2016. &quot;Lady Liberty&quot; was part of the Sound of Speed Air Show, hosted by the 139th Airlift Wing, Missouri Air National Guard to the thank the community for their support. (U.S. Air Force photo by Senior Airman Patrick P. Evenson)

This aircraft was cramped. There was very little elbow space or even places I could point the camera inside this Douglas A-26 "Lady Liberty". Cool aircraft and cool ride, but not much to work with. I throw my wide-angle on, and waited for the moment were something of context was in the huge overhead window. I was waiting for downtown St. Joe honestly, but with the position of the sun, the shot would be blown out. A nice second place option was the Missouri river, and with the way the sun was hitting Gary’s face, it made a nice highlight of him looking out the window. Photo complete. 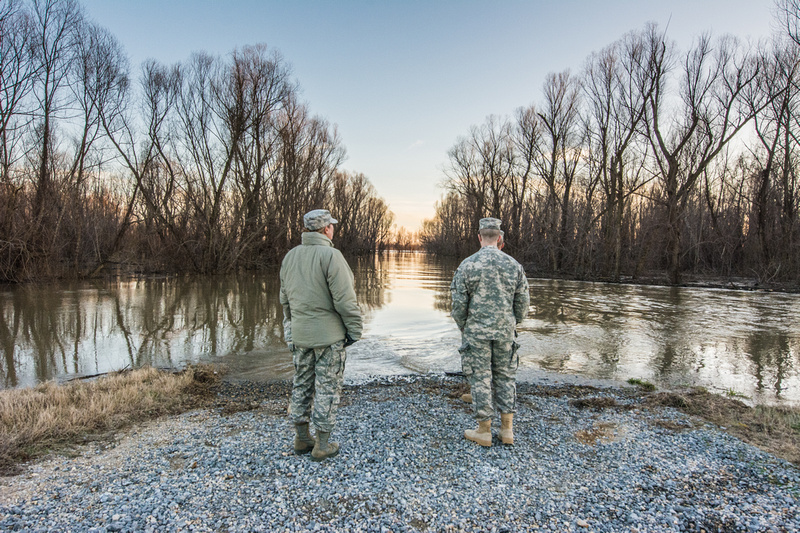 Floods happen a lot in Missouri. Some place in Missouri is always flooding it seems. Cue the National Guard. I love volunteering for things. That’s kind of the name of the game when joining the Guard, however I always dread getting those text messages from my command notifying me of the need to mobilize. It’s easy for me being single with no family and freelancing as a job. The great majority of citizen soldiers and airman can’t say the same. They leave their family, careers and civilian lives to respond to state emergencies. Yes, that is what they signed up for, but it doesn’t make it any less inconvenient. It needs to be done and they are always willing and ready. One day they are drinking a café latte at their job as a doctor, office assistant or college student – the next they are on the opposite side of the state standing at the new bank of a flooded river which a week prior was a road.

Photojournalism should be as much about the people and what I just described as it is about what is happening. 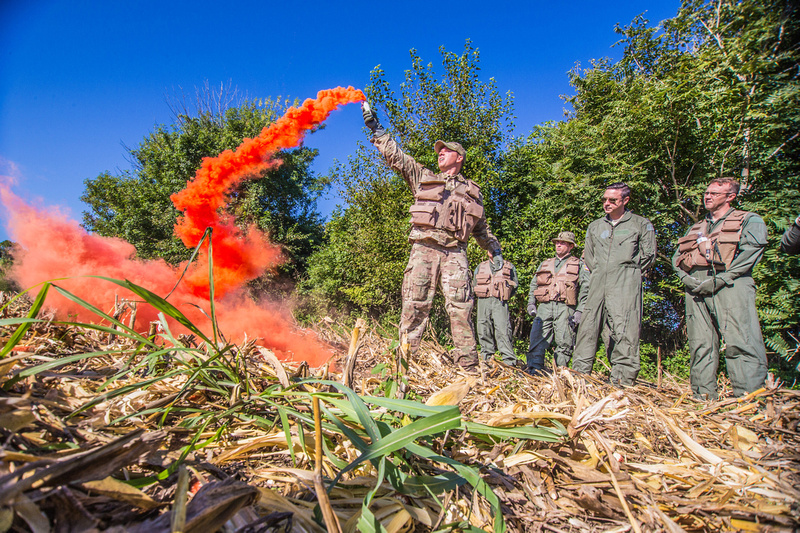 Farther below is a more digestive photo story of this aircrews’ survival training. As with most of these photos I've discussed so far, I always try to both fill the frame with information and get my camera in a position for a compelling angle. The reason I usually take a knee is because everyone sees the world from a standing level. That's not unique or interesting - it's everyday life. Not only does having the camera as close to the ground as I can get it give the moment a grandiose feel, but also it makes the ground as much a point of the image as the action being done. The ground gives the image location context and completes the framing that nature gives around our subjects. 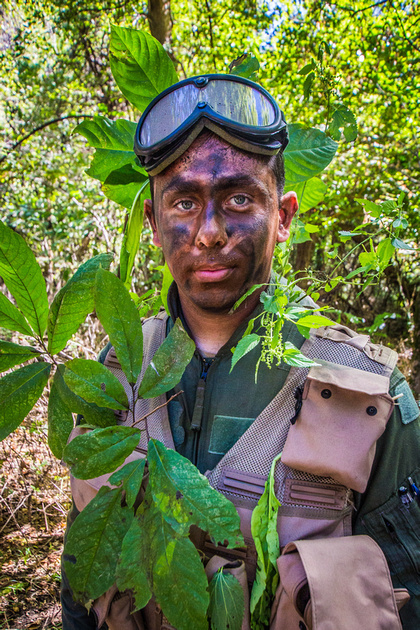 This is another photo from the same survival training. It is my least favorite photo in this portfolio. It’s super posed, which I personally hate. That’s not photojournalism, that’s a happy snap. For better or worse though it helped get me photographer of the year. 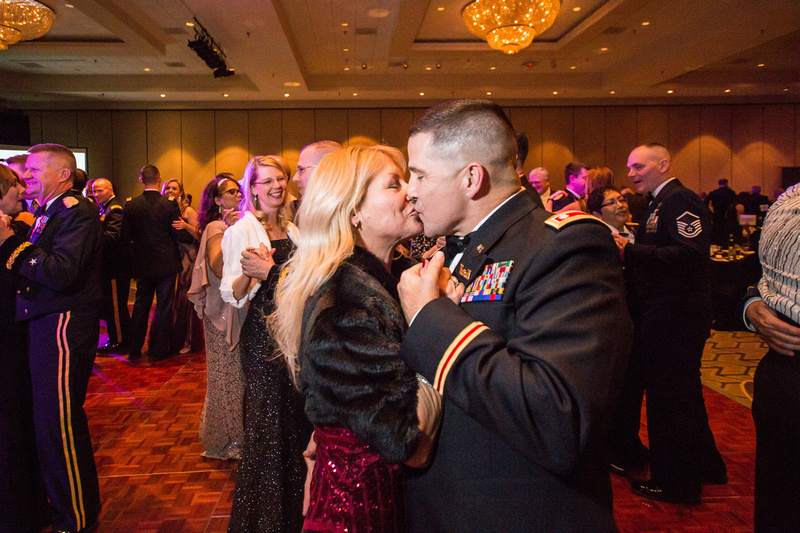 This photo of the Missouri National Guard's birthday ball, is one of my favorite photos in this collection. I’m a sucker for a good romance, and I’m drawn to the tenderness of this couples close embrace and kiss while dancing. The lighting from my off-camera speedlite adds the perfect light and shadow that makes them pop from the multiple other couples that fill the room. In this photo, the affection that these two share with one another is all that matters in the ballroom at Tan-Tar-A. 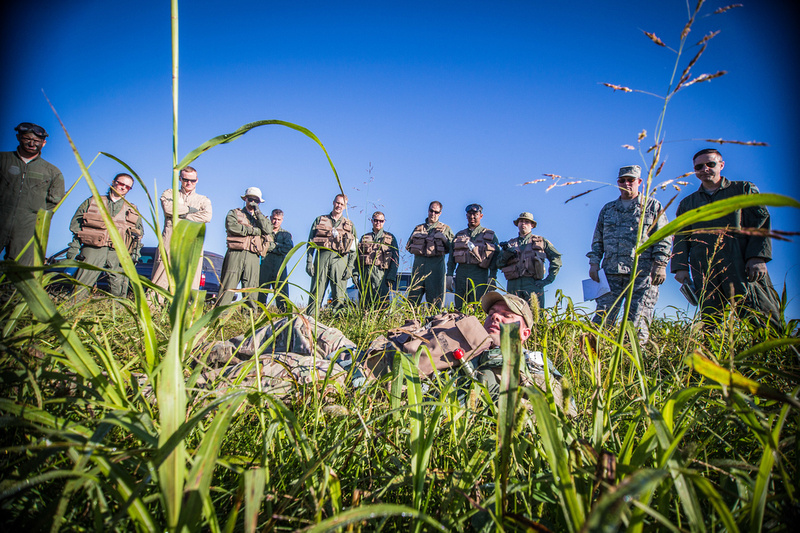 The last piece of my portfolio submission for the military photographer of the year award was a photo essay. I choose the Survival Evasion Resistance and Escape training to submit because it was the best collection of photos that told the story beginning to end. SERE training is required for all aircrew to equip them with survival techniques necessary in the event of an emergency. As can be seen in the photos I hope, it takes the aircrew members through the scenario of landing via parachute, planning a route back to safety, evading enemy detection and capture, signaling extraction. That's a very general description of the training but you get the point. 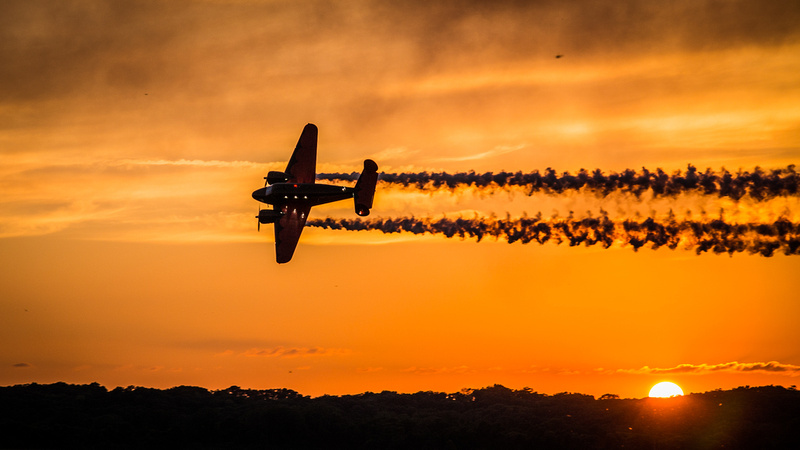 I didn't mention this earlier, but I actually won two awards. This is the photo that won first place in the Pictorial category. There isn't much to be said for this image. People like sunsets and people like air shows. Put them together and you get a great photo.

It’s been a good year for my photography over-all. From the Pioneer Building fire collection to the Christmas lights at Krug Park, it’s nice to do something that gain emotional responses from people. I might just be a Guardsman 12 weekends of the year, but I’m glad my passion and enjoyment of photography can be exploited there as well. 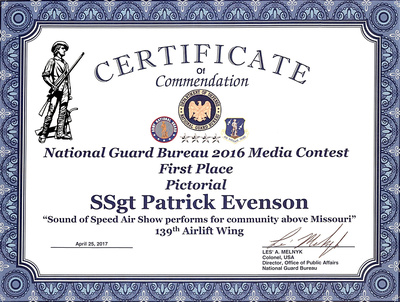 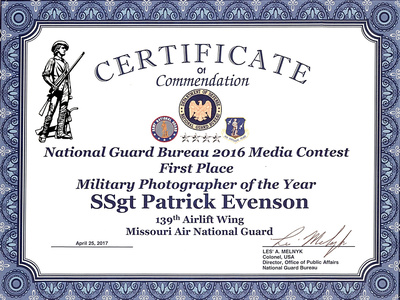